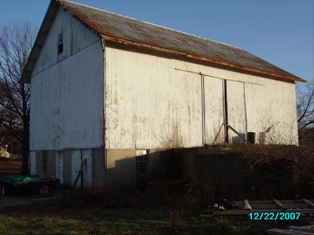 In September of 2007 I saw an ad in the local Cincinnati Tradin' Post newspaper for an auction of construction equipment at a local farm in West Chester, Ohio. Thinking that there might be some equipment I could use at our family farm (aerial photo), I went to check it out.

Located on this farm was a big, white dairy barn in really great shape.

Having watched several other barns in this fast growing area disappear, I asked the family member residing on the property what was going to become of this barn. She said that the new owner said that he might just 'burn it down'.  Feeling that it would be a shame for it to just be demolished, and needing a barn to replace the collapsed 1860's barn on our family farm in North Central Ohio, I contacted the new owner seeking permission to dismantle and move the barn. While awaiting his response, I sent out emails alerting different people and organizations to this barn in need of rescue. Organizations such as Friends of Ohio Barns and Barn Again.  But the response was less than overwhelming, apparently there are more barns than people and money to save them. After several weeks, as we were sliding into winter, I finally received an email granting me permission to take it down.

During those weeks, I also found a website, The Barn Journal, that had an ad page of people looking for barns or with barns available.  There was a couple year old ad from a guy in Dayton, OH looking for a barn, but he had already found one and moved it. But the discussion we had, and the advice he gave me, motivated me to proceed with the project myself.